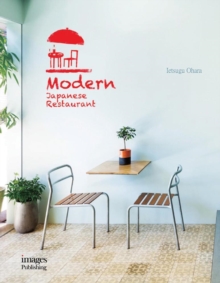 Provides a definitive statement of contemporary interior design in the Japanese dining space, which has international reach to a wide audience across a huge market.

Interior design in Japan both inherits its architectural legacy and absorbs the ideas from modern design.

This book, 'Modern Japanese Restaurant' comprises numerous types of contemporary interior designs of Japanese restaurants in recent years, exploring a wide variety of styles and types, including the izayaka, sushi bar, and cafe.

The design case studies that feature in this beautiful book are hoped to inspire interior designers and all those who are engaged in designing the Japanese style restaurant.

AUTHOR: Ietsugu Ohara was born in Kobe, Japan in 1974.

After graduating from the Hyogo Technical School of Architecture, he established his architectural design office STILE in Osaka in 2002.

He is known for his multi-sensory approach to design by using simple materials. He focuses on the direct sense from the construction itself and the spatial interrelation between the built environment and daily life.

He believes that the environment can help to create harmony among people.

Keeping in mind the basic events of life, his project highlights what is precious in this modern society so often consumed by materialism.

He is an insightful and sensitive architect and embodies the Japanese philosophy through his creations.

Ohara has won several design awards, including the Japanese Society of Commercial Space Designers Award, the Euro Shop / Japan Shop Excellence Award, and is the winner in the Asia Restaurant / Restaurant and Bar Design Awards (in London), 2012/13. SELLING POINTS: - Showcases IMAGES' strong talent for mining architectural gems from around the globe - Provides a definitive statement of contemporary interior design in the Japanese dining space, which has international reach to a wide audience across a huge market - Covers a range of contemporary projects (the majority have been accomplished in the last 24 months) offering a varied approach to modern perspectives of Japanese interior design - The majority of projects are from well-known architects or design studios based in Japan, such as Kengo Kuma and Associates, Nendo, Super Potato, etc. - Showcases a collection that is inspirational and a strong reference for architects, restauranteurs, and interior designers, and all who are directly involved in the epicurian industries 500 col., 60 b/w