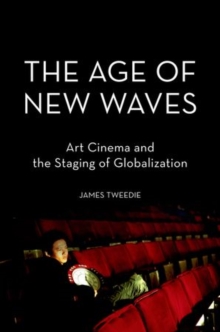 The Age of New Waves : Art Cinema and the Staging of Globalization Paperback / softback

The Age of New Waves examines the origins of the concept of the "new wave" in 1950s France and the proliferation of new waves in world cinema over the past three decades.

The book suggests that youth, cities, and the construction of a global market have been the catalysts for the cinematic new waves of the past half century.

It begins by describing the enthusiastic engagement between French nouvelle vague filmmakers and a globalizing American cinema andculture during the modernization of France after World War II.

It then charts the growing and ultimately explosive disenchantment with the aftermath of that massive social, economic, and spatial transformation in the late 1960s.

Subsequent chapters focus on films and visual culture from Taiwan and contemporarymainland China during the 1980s and 1990s, and they link the recent propagation of new waves on the international film festival circuit to the "economic miracles" and consumer revolutions accompanying the process of globalization.

While it travels from France to East Asia, the book follows the transnational movement of a particular model of cinema organized around mise en scene-or the interaction of bodies, objects, and spaces within the frame-rather than montage or narrative.

The "mastershot" style of directors like Hou Hsiao-Hsien, Tsai Ming-Liang, and Jia Zhangke has reinvented a crucial but overlooked tendency in new wave film, and this cinema of mise en scene has become a key aesthetic strategy for representing the changing relationships between people and the material world duringthe rise of a global market.

The final chapter considers the interaction between two of the most global phenomena in recent film history-the transnational art cinema and Hollywood-and it searches for traces of an American New Wave.