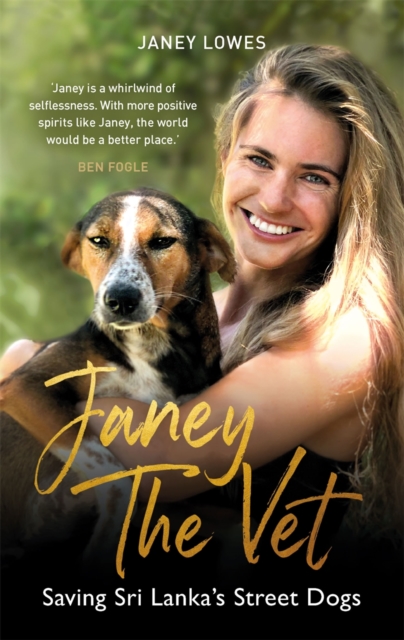 'Janey is like a whirlwind of selflessness. A beautiful spirit in a beautiful country doing a beautiful thing.

I encourage my children to be more 'Janey'. With more positive spirits like Janey, the world would be a better place.' - Ben FogleIn 2014 and in her mid-twenties, Janey Lowes had been a vet for just two years when she left her home in County Durham and went travelling.

Visiting Sri Lanka, she was horrified to see the state of so many of the island's dogs, in particular the three million strays.

Over 5,000 miles from home, Janey decided there and then that she was going to move to the island indefinitely and do everything within her power to help them.

She raised GBP10,000 to get started, setting up a charity called WECare Worldwide, and began work.

Frightened, determined and excited all at the same time, she found a local who was willing to work with her and began scouring the streets for dogs in need.

Some she patched up as best she could at the roadside, others she brought back and treated in a make-shift surgery she had cobbled together in her new home.

With very little equipment, she and her small team came up with new and ingenious ways to treat the animals. In this highly inspiring and heartfelt book full of challenges and adventure, Janey introduces us to her world and the tireless work she carries out.

As she says, 'I feel as though all these dogs are my dogs and I have a responsibility to them.' In it, we meet many of the colourful characters who have come to offer help, along with innumerable street dogs who have suffered all sorts of trauma and injury, only to be scooped up by Janey and her team and saved.