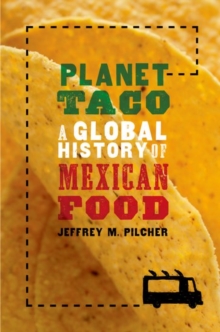 As late as the 1960s, tacos were virtually unknown outside Mexico and the American Southwest.

Within fifty years the United States had shipped taco shells everywhere from Alaska to Australia, Morocco to Mongolia.

But how did this tasty hand-held food-and Mexican food more broadly-become so ubiquitous?

In Planet Taco, Jeffrey Pilcher traces the historical origins and evolution of Mexico's national cuisine, explores its incarnation as a Mexican American fast-food, shows how surfers became global pioneers of Mexican food, and how Corona beer conquered the world.

Pilcher is particularly enlightening on what the history of Mexican food reveals about the uneasy relationship between globalization and authenticity.

The burritos and taco shells that many people think of as Mexican wereactually created in the United States.

But Pilcher argues that the contemporary struggle between globalization and national sovereignty to determine the authenticity of Mexican food goes back hundreds of years.

During the nineteenth century, Mexicans searching for a national cuisine were torn between nostalgic"Creole" Hispanic dishes of the past and French haute cuisine, the global food of the day.

Indigenous foods were scorned as unfit for civilized tables.

Only when Mexican American dishes were appropriated by the fast food industry and carried around the world did Mexican elites rediscover the foods of the ancient Maya and Aztecs and embrace the indigenous roots of their national cuisine.

From a taco cart in Hermosillo, Mexico to the "Chili Queens" of San Antonio and tamale vendors in L.A., Jeffrey Pilcher follows this highly adaptable cuisine, paying special attention to the people too often overlooked in the battle to define authentic Mexican food: Indigenous Mexicans and Mexican Americans.