A Revolution for Our Rights : Indigenous Struggles for Land and Justice in Bolivia, 1880-1952 Hardback

A Revolution for Our Rights is a critical reassessment of the causes and significance of the Bolivian Revolution of 1952.

Historians have tended to view the revolution as the result of class-based movements that accompanied the rise of peasant leagues, mineworker unions, and reformist political projects in the 1930s.

Laura Gotkowitz argues that the revolution had deeper roots in the indigenous struggles for land and justice that swept through Bolivia during the first half of the twentieth century.

Challenging conventional wisdom, she demonstrates that rural indigenous activists fundamentally reshaped the military populist projects of the 1930s and 1940s.

In so doing, she chronicles a hidden rural revolution-before the revolution of 1952-that fused appeals for equality with demands for a radical reconfiguration of political power, landholding, and rights.Gotkowitz combines an emphasis on national political debates and congresses with a sharply focused analysis of Indian communities and large estates in the department of Cochabamba.

The fragmented nature of Cochabamba's Indian communities and the pioneering significance of its peasant unions make it a propitious vantage point for exploring contests over competing visions of the nation, justice, and rights.

Scrutinizing state authorities' efforts to impose the law in what was considered a lawless countryside, Gotkowitz shows how, time and again, indigenous activists shrewdly exploited the ambiguous status of the state's pro-Indian laws to press their demands for land and justice.

Bolivian indigenous and social movements have captured worldwide attention during the past several years.

By describing indigenous mobilization in the decades preceding the revolution of 1952, A Revolution for Our Rights illuminates a crucial chapter in the long history behind present-day struggles in Bolivia and contributes to an understanding of indigenous politics in modern Latin America more broadly. 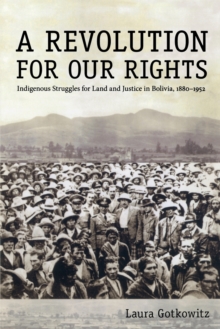 A Revolution for Our Rights