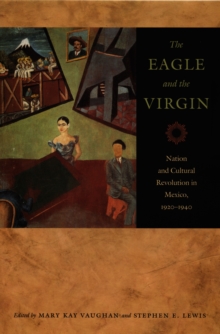 The Eagle and the Virgin : Nation and Cultural Revolution in Mexico, 1920-1940 Hardback

When the fighting of the Mexican Revolution died down in 1920, the national government faced the daunting task of building a cohesive nation.

It had to establish control over a disparate and needy population and prepare the country for global economic competition.

As part of this effort, the government enlisted the energy of artists and intellectuals in cultivating a distinctly Mexican identity.

It devised a project for the incorporation of indigenous peoples and oversaw a vast, innovative program in the arts.

The Eagle and the Virgin examines the massive nation-building project Mexico undertook between 1920 and 1940.Contributors explore the nation-building efforts of the government, artists, entrepreneurs, and social movements; their contradictory, often conflicting intersection; and their inevitably transnational nature.

Scholars of political and social history, communications, and art history describe the creation of national symbols, myths, histories, and heroes to inspire patriotism and transform workers and peasants into efficient, productive, gendered subjects.

They analyze the aesthetics of nation building made visible in murals, music, and architecture; investigate state projects to promote health, anticlericalism, and education; and consider the role of mass communications, such as cinema and radio, and the impact of road building.

Most important, the volume weighs in on debates about the tension between the eagle (the modernizing secular state) and the Virgin of Guadalupe (the Catholic defense of faith and morality).