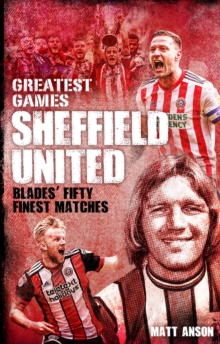 Sheffield United Greatest Games offers every Blade a terrace ticket back in time.

Described in atmospheric and evocative detail, here are 50 of the club's most thrilling and glorious games of all.

Founded in 1889, Sheffield United were soon among the football elite, winning the league championship and FA Cup (twice) within their first two decades.

After adding another two pre-war cup wins, the second half of the 20th century saw a sad decline, with the club dropping to the fourth tier before clawing its way back to the top flight and then yo-yoing between the top three divisions in the new century.

Here are tales that bring to life the exploits of the club's greatest ever players, including Bill 'Fatty' Foulke, Ernest Needham, Harry Johnson, Jimmy Hagan, Tony Currie and Brian Deane - as well as managers such as John Harris, Dave Bassett and Neil Warnock.

There's action in all four divisions, unforgettable cup and play-off exploits and great derby days, from the first ever victory to the memorable 4-2 win at Hillsborough in 2017.