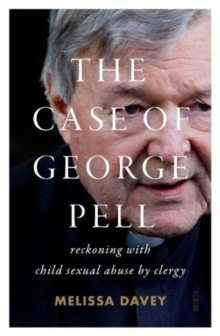 Some people will have wanted me to give my opinion in this book about Pell's guilt or innocence, and on whether the courts got it right or wrong.

But that's not what this book is about ... I want to share what I have learned, including the facts as they unfolded.

I want readers to have as much evidence as is possible before them as they consider the Pell trials. And I want any response to his conviction and appeals to be, at the very least, informed by the evidence. Guardian Australia's Melbourne bureau chief, Melissa Davey covered Cardinal George Pell's evidence at the royal commission into child sexual abuses, and attended each of his trials for his alleged historic sexual offences against children - his committal hearing, mistrial, retrial, and appeals. What she saw, heard, and read made her determined to produce a dispassionate and thorough rendition of what occurred.

The Case of George Pell is the result - an authoritative account of those trials, of the basis for the verdicts, and of the backlash to the verdicts.

It is inevitably not only about Cardinal Pell, but about justice in the age of conservative media, about culture wars, and about the broader context of clergy abuse. Despite a five-year-long sexual-abuse inquiry, the trials of one of the most senior Catholics in the world, and saturation coverage of the issue, it became evident to Ms Davey that many myths about the nature of child sexual abuse persist - and that, for some people, the evidence of victims can never be allowed to tarnish the reputation of the church and its practitioners. The Case of George Pell is not just about one alleged offender, and one complainant.

It is also about how the sexual abuse of children occurs - and has been allowed to continue.