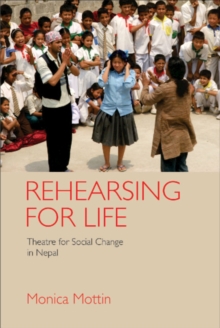 Rehearsing for Life : Theatre for Social Change in Nepal Hardback

This work examines the production and performance of theatrical activities aimed at bringing about social change in both development and political intervention in Nepal.

This multi-sited ethnography attempts to answer this question by following the works of Aarohan Theatre - a Kathmandu-based professional company, performing both loktantrik natak (theatre for democracy) in the context of the 2005-06 popular movement, and kachahari natak (forum theatre) for development projects.

The analysis then extends to the forum theatre produced by one of Aarohan's partner groups, the Kamlari Natak Samuha - a Tharu grassroots activist organization based in Deukhuri Valley (West Nepal) campaigning against indentured child labour.