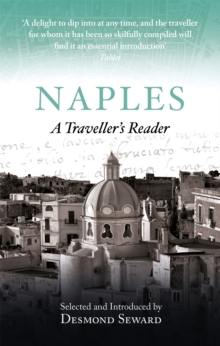 Many Italian cities look back with pride to the days when they were independent republics: Naples, on the contrary, remembers its days as a royal capital, the brilliant administrative and political centre of The Kingdom of The Two Sicilies, ruled over successively by the house of Anjou, Aragon and Bourbon.

Once 'the third city of Europe', today it is one of the least visited of the continent's great cities.

The same bustling lively atmosphere and magnificent buildings that one finds in Paris or London exist here. This book is a topographical anthology which recreates for today's tourist the drama, the history and the life of a city in buildings and locations that still exist today.

An indispensable companion, it brings the past of Naples vividly to life for the traveller of the present.

Extracts from chronicles, memoirs, biographies, letters and novels refer to the most important and beautiful buildings in and around Naples, as well as the lives of travellers to and residents of this famous city. This is a guide to the vanished glories of royal Naples: the departure of the Borbone King Francis II in 1860 as the Risorgimento movement brought about unification of Italy.

It records the turbulent and bloodstained days of the Angevin Queens Giovanna I and II, and the revolt led by the young fisherman Masaniello; the artistic life of the city that Petrarch knew, where Caravaggio, Ribera and Giordano painted, and which attracted such diverse visitors as Nelson and Lady Hamilton, Casanova, Goethe, Mozart, John Evelyn and Angelica Kauffman among countless others.

The dazzling world of the royalty - their palaces overlooking the legendarily beautiful Bay of Naples, their court balls and ceremonies - is described as well as the pulsing, overcrowded slums of the Spanish quarter and the seafront with its tarantella-dancers, iced-melon vendors, pickpockets and throbbing Neopolitan songs. Naples is still, as it always has been, a city of challenging contrasts: sunlight and squalor, grandeur and decay, gaiety and despair.

Its slums and its crime-rate have deterred many, but those who persist will discover, through this illuminating guide, the hidden glories of this famous city.