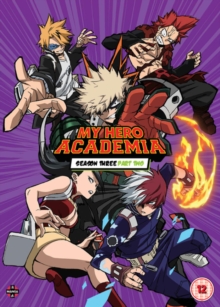 The final 13 episodes from the third season of the Japanese anime based in a world where the majority of the population possess superpowers known as Quirks.

The episodes are: 'Moving Into Dorms', 'Create Those Ultimate Moves', 'The Test', 'Shiketsu High Lurking', 'Class 1-A', 'RUSH!', 'Rescue Exercises', 'Special Episode: Save the World With Love!', 'What's the Big Idea?', 'A Talk About Your Quirk', 'Deku Vs Kacchan, Part 2', 'A Season of Encounters' and 'Unrivaled'.