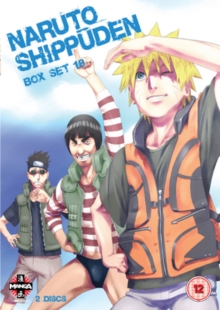 A trio of young ninjas, Naruto (voice of Junko Takeuchi), Sasuke (Noriaki Sugiyama) and Sakura (Chie Nakamura), are schooled together in the village hidden in the leaves.

Each desires to become a ninja for different reasons and will face his or her own personal battles along the way.

The episodes are: 'Kakashi Hatake, the Hokage', 'Prophecy of the Great Lord Elder', 'Storage', 'The Five Kage's Decision', 'The Young Man and the Sea', 'The Ninja of Benisu', 'The Cursed Ghost Ship', 'Battleship Island', 'The Forgotten Island', 'Fight!

Rock Lee!', 'Eat Or Die! Mushrooms from Hell!', 'Revenge of the Shadow Clones' and 'The Closed Route'.