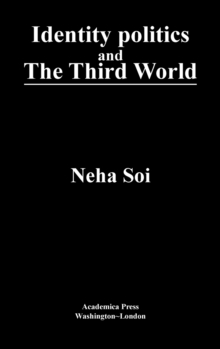 Identity Politics and the Third World revisits the theories of identification in challenging existing methods of ascertaining developing world identities on the grounds of objectivity and universality.

The construction of postcolonial identities refers to the creation of systems of identification.

This construction is undertaken at two levels: by the colonizer, in the form of myths about the subject races and a simultaneous belief in the notion that the subject cannot represent him/herself; and subsequently, by the colonized in an attempt to resist colonization and establish a sense of solidarity against the rulers.

In the global context, the third world becomes a market place where identities are framed by the laws of consumer dynamics.

Identities are again constructed here on two levels: by the forces of multinational economics, in the form of essentially hybrid, homogenously differentiated communities, and, in counterpoint, by the myths of unique national cultures. This book is designed to describe and critically analyse the structuring of identity and culture and the politics that informs them.

Centering on the concepts of `polarity' and `in-betweenness', the idea of cosmopolitan or global identity is deconstructed in the wake of capitalist consumerism and multinational politics using the theories of identity construction and representation as formulated by Edward Said and Homi Bhabha for understanding colonialist politics and the postcolonial condition.