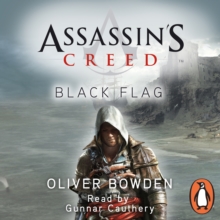 This unabridged, downloadable audiobook edition is read by Gunnar Cauthery. It's the Golden Age of Piracy - a time when greed, ambition and corruption overcome all loyalties - and a brash young captain, Edward Kenway, is making his name known for being one of the greatest pirates of his day. In the brilliant new novel, Assassin's Creed: Black Flag, discover the story of how Edward, a young privateer, became one of the world's most deadly pirates and was drawn into the centuries-old battle between the Templars and the Assassins. The immersive story of the Assassins is continued in Oliver Bowden's gripping sixth Assassin's Creed novel, following Renaissance, Brotherhood, The Secret Crusade, Revelations and Forsaken. Oliver Bowden is the pen-name of an acclaimed novelist.