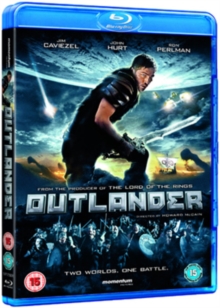 Historical sci-fi action adventure set in the time of the Vikings, starring Jim Caviezel as a 'man who fell to earth'.

When Kainan (Caviezel), a traveller from a distant galaxy, crash lands on Earth, he brings more than good wishes with him.

He's accompanied by a nasty, giant alien known as the Moorwen that's bent on causing havoc and destruction.

Although Kainan has issues with his eighth century Nordic hosts, he soon joins forces with them, fusing his advanced, otherworldly technology with their Iron Age weaponry in an attempt to bring down the brutal Moorwen.