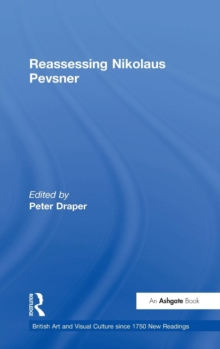 Nikolaus Pevsner was one of the most important and influential art historians of the twentieth century.

He opened up new areas of enquiry in the history of art, revolutionising architectural studies in England and playing a key role in establishing the discipline of design history.

Through his lectures and broadcasts, as well as the remarkable volumes in The Buildings of England series which made him a household name, he did much to encourage greater interest in, and understanding of, art and architecture among a wide public.

This wide-ranging collection of essays, based on papers delivered at the conference held at Birkbeck in celebration of the centenary of Pevsner's birth, offers the first sustained critical assessment of Pevsner's achievements.

With contributions by leading international scholars, the volume brings together a wealth of new material on Pevsner and his intellectual background, both in Germany in the late 1920s and 1930s and in England, particularly in the 1940s and 1950s.