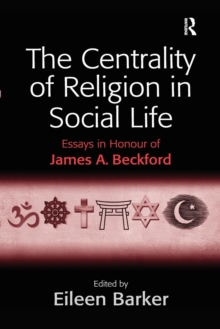 The Centrality of Religion in Social Life : Essays in Honour of James A. Beckford Paperback / softback

James A. Beckford's work is internationally acclaimed not only in the sociology of religion, but also in other fields of the social sciences.

Beckford has long been arguing that the barriers that have grown up between the different sub-disciplines should be broken down, with those specialising in religion becoming more cognisant of new theoretical developments, and sociologists in general becoming more aware of the significance of developments in the religious scene. This book is a collection of essays written in Beckford's honour, drawing on a number of religious themes that have been central to Beckford's interests, whilst also offering a significant contribution to our understanding of the wider society.

The contributors, who come from America, Asia and various parts of Europe, are all internationally renowned scholars.

Beckford's most important publications are listed in an Appendix and the volume opens with a short account of his contribution to sociology by Eileen Barker (the editor) and James T.