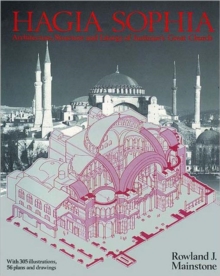 Justinian's Great Church in Constantinople was the culminating architectural achievement of late antiquity and the first great masterpiece of the Byzantine world.

For over 900 years it was Christendom's grandest place of worship, and, for most of this time, the seat of the Orthodox patriarch and a principal setting for imperial ceremonies.

After the fall of Constantinople to the Ottomans, for almost 500 years more it was one of the most important mosques of Istanbul.

Its influence was widespread and lasting, both architecturally and liturgically.

Rowland Mainstone draws on 30 years of study, detailed observations and critical reading of the historic source material, to present this authoritative account of the genesis and development of the designs of the church's building, and of the principal subsequent changes.

His descriptions are geared towards bringing alive the achievement of an unprecedentedly ambitious project for which there were no drawings, building accounts or similar historic records.