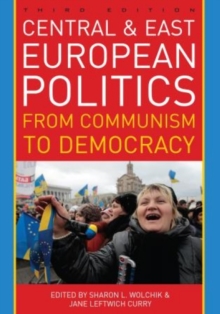 Central and East European Politics : From Communism to Democracy Hardback

Now in a fully updated edition, this essential text explores the post-communist half of Europe and the problems and potential it brings to the world stage.

Clear and comprehensive, the book offers an authoritative and current analysis of the region's transformations and realities-from pre-communist history to the victories and reversals in Central and Eastern Europe, the Baltics, and Ukraine, including the Euromaidan and its domestic and international ramifications.

Divided into two parts, the book presents a set of comparative country case studies as well as thematic chapters on key issues, including EU and NATO expansion, the economic transition and its social ramifications, the role of women, persistent problems of ethnicity and nationalism, legacies of the past, and political reform.

They explain how communism ended and how democratic politics has developed or is struggling to emerge in its wake, how individual countries have transformed their economies, how their populations have been affected by rapid and wrenching change, and how foreign policy making has evolved. They explore the reversals and conflicts that have emerged even in the most successful transitions and their relevance to our understanding of political transitions and democratic consolidation in general.

For students and specialists alike, this book will be an invaluable resource on the politics and economics of Central and Eastern Europe, caught between the EU and a resurgent Russia.