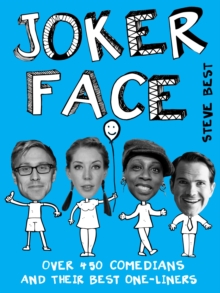 Stewart Lee has seen a ghost but doesn't believe in the afterlife.

Rob Beckett can peel a banana with his feet. Viv Groskop gave birth to a baby next to a dishwasher. What do you get when you combine unknown facts about some of Britain's best-loved comedians with their favourite one-liners and candid, black-and-white portraits?

The result is Joker Face, a hilarious record of the British comedy scene from comedian Steve Best, a 20-year veteran of the comedy circuit.

In this book - a companion to the 2014 book Comedy Snapshot - Best paints an intimate and very funny portrait of some of our favourites: Jimmy Carr, Rob Delaney, Sarah Pascoe, Stewart Lee, John Bishop, Mackenzie Crook, Josie Lawrence, Mark Watson, Tommy Tiernan, Phill Jupitus, and many, many more. Joker Face is an essential book for any fan of British humour and gives us a backstage pass into the world of comedy.