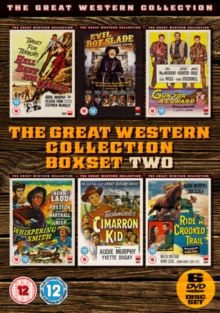 Collection of six Westerns. In 'Hell Bent for Leather' (1960), after losing his horse to thieves, Clay Santell (Audie Murphy) finds himself in the town of Sutterville.

While there he is falsely identified by the locals as wanted murderer Travers (Jan Merlin) and, despite knowing the truth, US Marshal Harry Deckett (Stephen McNally) decides to punish Clay for Travers' crimes in order to advance his career.

Clay is forced to go on the run, taking with him a hostage, Janet Gifford (Felicia Farr), who ends up helping him in his attempt to clear his name.

In 'Evil Roy Slade' (1972), having been abandoned as a young child, Evil Roy Slade (John Astin) grows up to become the most notorious villain in the Wild West.

However, he finds he has a softer side when he falls in love with schoolteacher Betsy Potter (Pamela Austin).

In 'Gun for a Coward' (1957) widowed mother of three Hannah (Josephine Hutchinson) wishes she could find a way to protect her sons from the brutal world of the West.

Eldest Will (Fred MacMurray) has already taken the place of his father as head of the ranch and is quite happy working the land; the two younger sons, Bless and Hade (Jeffrey Hunter and Dean Stockwell) are still making up their minds what to do with their lives.

When Hannah decides she wants to move to the city of St.

Louis to escape the troubles of the West, she asks Bless to go with her.

Bless, always wanting to prove himself as a cowboy, refuses and vows to overcome his cowardice once and for all.

Smith is reunited with his old friend, railroad worker Murray Sinclair (Robert Preston), but comes to believe he may be involved with the Bartons.

As Smith sets about bringing the criminals to justice he also becomes close to Sinclair's wife Marian (Brenda Marshall)...

In 'The Cimarron Kid' (1952), after being accused of a crime he didn't commit, Bill Doolin aka The Cimarron Kid (Murphy) becomes a fugitive and joins a gang of outlaws, helping them to pull off a number of robberies.

When he meets a ranch owner's daughter, Carrie Roberts (Beverly Tyler), the two fall in love but Doolin decides to perform one final robbery before going straight.

Will it cost him his chance at happiness? In 'Ride a Crooked Trail' (1958), when a US marshal dies, outlaw Joe Maybe (Murphy) takes his identity and arrives in Webb City where Judge Kyle (Walter Matthau) makes him sheriff.

Maybe plans to use his new status to rob the local bank.

However, the arrival of an old flame, Tessa (Gia Scala), and his rival Sam Teeler (Henry Silva) complicates matters.

Can Maybe still pull off the heist? 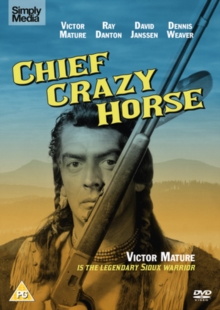 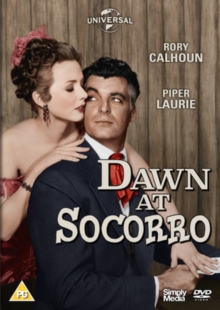 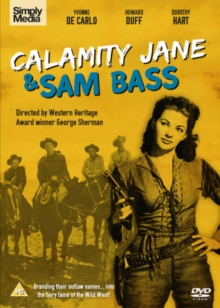 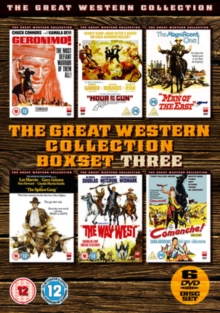