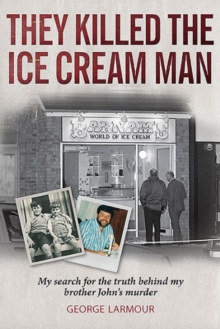 They Killed the Ice Cream Man : My Search for the Truth Behind My Brother John's Murder Paperback / softback

My brother John Larmour was a police officer in the Royal Ulster Constabulary (RUC).

On October 11th 1988 he was off duty and looking after my family-run ice cream parlour, Barnam's World of Ice Cream.

I was on holiday in Spain with my wife and two young daughters at the time.

John was shot dead that night by the IRA. A teenage couple were also in the parlour. The gunmen callously opened fire on them too. One of the guns they used had been taken from a murdered soldier.

The other was a police issue pistol that had been used in other killings.

My brother's brutal murder has been gently immortalised in a poem 'The Ice Cream Man' by award winning poet, Michael Longley.

His thoughtful words brought a degree of comfort to my Mum and Dad who died of broken hearts.

My brother, like all police officers, lived with constant danger.

He knew that. But he couldn't have known the complexity of the story that would unfold after his death.

My search for the truth behind John's murder started on that fateful night in October 1988.

Wrangling with the police and the 'cold case' Historical Enquiries Team, raised suspicions, not lightly dispelled, of collusion.The more I learned the more I came to suspect that recruiting and protecting an agent, a 'Supertout' inside the upper echelons of the IRA was more important to some of John's police colleagues than catching his killers.This is my story.