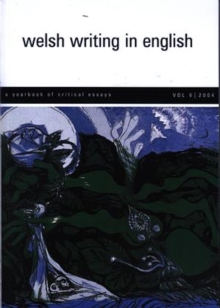 Welsh Writing in English: A Yearbook of Critical Essays is the first academic journal devoted solely to the study of the English-language writing of Wales.

It is the principal forum for critical discussion of the whole chronological range of Welsh writing in English.

Included in this issue are discussions of the work of the remarkable artistic group that grew up in Swansea in the early years of the twentieth century.

Jackie Benjamin reads Dylan Thomas's Under Milk Wood in the light of current critical ideas of 'carnival', while Tony Curtis discusses the response of Ceri Richards in his painting to the poetry of his friend Vernon Watkins.

In other essays Geraint Evans considers the different ways in which R.

S. Thomas and Gwyneth Lewis negotiate the border between Wales's two languages while Joseph Clancy reflects on the challenges of translating poetry across that border.