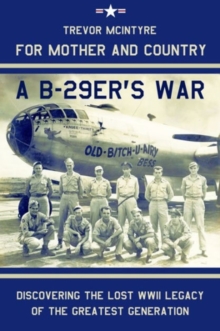 For Mother and Country - A B-29er's War : Discovering the Lost WWII Legacy of the Greatest Generation Hardback

They were called 'B-29ers' - the men of the 20th Air Force who brought the WWII Japanese Empire to its knees with the greatest bomber the world had ever seen.

Through airpower alone they quashed the will of a ruthless and fanatical enemy, bringing an early end to the war and pre-empting the need for a bloody land invasion that would have cost up to one million American casualties - all with a bomber that didn't even exist a few short years before.

Now nearly 70 years after the end of the largest war in the history of mankind, the stories of those men who valiantly fought and died aboard the Boeing B-29 Superfortress bombers are quickly disappearing as the final chapter begins to close upon the Greatest Generation, slowly fading into the twilight of their lives.

For Mother and Country follows one young man's emotional journey discovering the lost WWII legacy of the Greatest Generation through the relics they leave behind, as he fights to save the final reminders of their sacrifices for generations yet to come. His journey discovers the stories of the men he only knew from their faded photographs, letters, and souvenirs- stories of bravery, self-sacrifice and determination.

The forgotten stories discovered along his journey are woven into a gripping narrative that brings the B-29er's epic battle in the skies over Japan to life, taking the reader inside the cockpit during some of the most harrowing missions of the war.

For Mother and Country is a reminder of the sacrifices of yesterday that gave every American the freedoms of today; a tribute in remembrance of the brave aircrews who brought an end to the Second World War, and honouring those who never returned home to the country they died to preserve. This was the Greatest Generation's war for"Mother and Country." This was a B-29er's war.