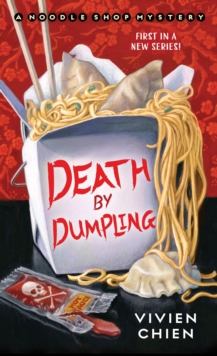 Part of the A Noodle Shop Mystery series

Lana Lee never thought she'd be stuck working at the family restaurant in her late twenties, but here she is, wiping down tables sticky with the remnants of General Tso's chicken.

But after a messy breakup and a dead-end job, she figured working at the Ho-Lee Noodle House wouldn't be too bad, right?

The charming shopping plaza, Asia Village, is where Lana spent most of her childhood and although she'd rather avoid it for that specific reason; she agrees to work full-time at the restaurant until a better prospect of employment comes along. Things seem to be going smoothly enough until one of the property managers of the shopping plaza, Thomas Feng, is found dead in his office.

Unfortunately, for Lana and the restaurant's head chef, the death looks like murder, and the murder weapon looks like dumplings from none other than the Ho-Lee Noodle House.

While the dumplings look innocent enough, it's what's on the inside that counts, which is pork and shrimp, a deadly combination for Thomas, who everyone knows suffers from a severe shellfish allergy.

The police immediately suspect Lana's family, and now, with her parents' restaurant at stake, she sees no other option but to figure out what really happened to Thomas, and why.