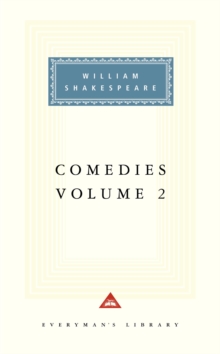 The penultimate volume in the 8-volume Everyman Signet Shakespeare contains Shakespeare's later Comedies - THE MERCHANT OF VENICE, THE MERRY WIVES OF WINDSOR, MUCH ADO ABOUT NOTHING, AS YOU LIKE IT, TWELFTH NIGHT, ALL'S WELL THAT ENDS WELL and MEASURE FOR MEASURE.

The beautifully produced, single-column text of the plays, with the Signet footnotes, is supplemented with bibliographies, a detailed chronology of Shakespeare's life and times, and a substantial introduction in which Professor Tony Tanner discusses each play individually while setting each in content.

The seven plays bought in Penguin would cost 23. 20, while the Cambridge and Oxford Classics editions cost 33. 25 and 27. 50 respectively.