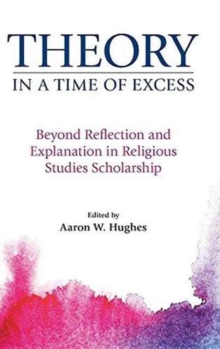 Theory in a Time of Excess : Beyond Reflection and Explanation in Religious Studies Scholarship Hardback

What does it mean to "do theory" in the study of religion today?

The terms "method and theory" are now found in course titles, curricula/degree requirements, area/comprehensive exams, and frequently listed as competencies on the CVs of scholars from across a wide array of subfields.

Are we really that theoretically and methodologically sophisticated?

While a variety of groups at annual scholarly conferences now regularly itemize theorizing among the topics that they examine and carry out, it seems that few of the many examples of doing theory today involve either meta-reflection on the practical conditions of the field or rigorously explanatory studies of religion's cause(s) or function(s).

So, despite the appearance of tremendous advances in the field over the past 30 years, it can be argued that little has changed.

Indeed, the term theory is today so widely understood as to make it coterminous with virtually all forms of scholarship on religion.

This volume seeks to re-examine just what we ought to consider theory to signify.