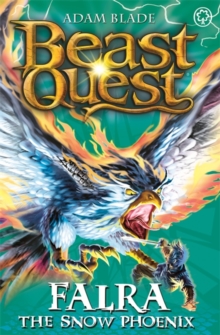 Battle fearsome beasts and fight evil with Tom and Elenna in the bestselling adventure series for boys and girls aged 7 and up. Tom's deadliest Quest yet reaches a terrifying conclusion as he enters the Pit of Fire to battle Falra!

Can our hero defeat the Beast and find the final potion ingredient needed to break Kensa's curse?

There are FOUR thrilling adventures to collect in the Beast Quest: The Cursed Dragon series: Raffkor the Stampeding Brute; Vislak the Slithering Serpent; Tikron the Jungle Master; Falra the Snow Phoenix. If you like Beast Quest, check out Adam Blade's other series: Team Hero, Sea Quest and Beast Quest: New Blood!