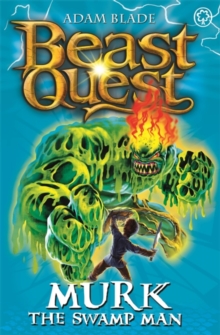 Battle fearsome beasts and fight evil with Tom and Elenna in the bestselling adventure series for boys and girls aged 7 and up. The land of Kayonia is descending into chaos! Everywhere Tom looks he sees decay and destruction: all the work of Wizard Velmal.

Tom must now face not only Murk the Swamp Man, but also a deadly assassin sent to kill him... There are SIX thrilling adventures to collect in the Beast Quest: The World of Chaos series: Komodo the Lizard King; Muro the Rat Monster; Fang the Bat Fiend; Murk the Swamp Man; Terra Curse of the Forest; Vespick the Wasp Queen. If you like Beast Quest, check out Adam Blade's other series: Team Hero, Sea Quest and Beast Quest: New Blood!