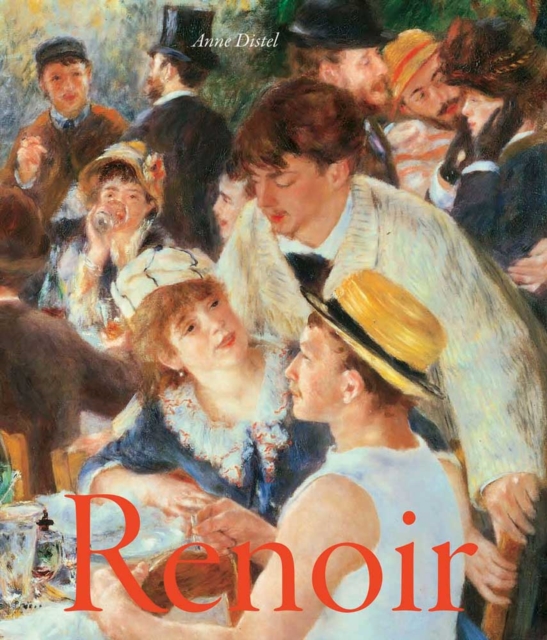 Pierre-Auguste Renoir (1841-1919) stands out among the great artists for his willingness to paint pictures that are straightforwardly pretty and charming: he chooses familiar and sympathetic human types as his subjects, and depicts them with an appealing immediacy, using an attractively bright and rosy palette.

Not all of his four thousand or so paintings are equally good; some fall short on formal grounds, and others, not surprisingly, sink into sentimentality.

But Renoir's best works are masterpieces, perhaps the most joyous and effervescent ones in the history of art-his great monuments to leisure, Dancing at the Moulin de la Galette and Luncheon of the Boating Party; his delicate portraits of women and children, like the winsome Girl with a Watering Can; and his many frankly sensual nudes. In this highly readable monograph, noted art historian Anne Distel offers an illuminating new account of the life of the man who created such singularly sparkling works.

The author deftly narrates Renoir's rise from apprentice porcelain painter to celebrated artist, quoting judiciously from the painter's own vivid letters and offering keen analyses of his style at each stage of his sixty-year career. And Distel does not consider that career in isolation, but uses the latest discoveries in the documentary evidence-some of them her own-to re-create the artistic and social milieus in which Renoir worked.

She traces his relationships with other artists, both his fellow Impressionists and older contemporaries like Corot and Daubigny as well as the younger Bonnard, Matisse, and Picasso; with writers like Zola, Mallarme, and Mirbeau; and, in particular, with the dealers and patrons who were so important to his career, like Paul Durand-Ruel, Ambroise Vollard, the Bernheim brothers, the Charpentiers, the Berards, Charles Ephrussi, and Dr. Barnes. Distel's authoritative text is illustrated throughout with some three hundred beautiful color reproductions of the artist's finest and most representative works, ensuring that this will be the Renoir monograph of reference for years to come.