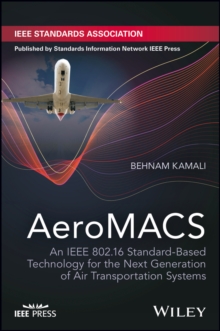 AeroMACS : An IEEE 802.16 Standard-Based Technology for the Next Generation of Air Transportation Systems Hardback

This is a pioneering textbook on the comprehensive description of AeroMACS technology.

It also presents the process of developing a new technology based on an established standard, in this case IEEE802.16 standards suite. The text introduces readers to the field of airport surface communications systems and provides them with comprehensive coverage of one the key components of the Next Generation Air Transportation System (NextGen); i.e., AeroMACS.

It begins with a critical review of the legacy aeronautical communications system and a discussion of the impetus behind its replacement with network-centric digital technologies.

It then describes wireless mobile channel characteristics in general, and focuses on the airport surface channel over the 5GHz band.

This is followed by an extensive coverage of major features of IEEE 802.16-2009 Physical Layer (PHY)and Medium Access Control (MAC) Sublayer.

The text then provides a comprehensive coverage of the AeroMACS standardization process, from technology selection to network deployment.

It also looks at future trends and developments of AeroMACS networks as they are deployed across the world, focusing on concepts that may be applied to improve the future capacity.

In addition, this text: Discusses the challenges posed by complexities of airport radio channels as well as those pertaining to broadband transmissionsExamines physical layer (PHY) and Media Access Control (MAC) sublayer protocols and signal processing techniques of AeroMACS inherited from IEEE 802.16 standard and WiMAX networksCompares AeroMACS and how it relates to IEEE 802.16 Standard-Based WiMAX AeroMACS: An IEEE 802.16 Standard-Based Technology for the Next Generation of Air Transportation Systems will appeal to engineers and technical professionals involved in the research and development of AeroMACS, technical staffers of government agencies in aviation sectors, and graduate students interested in standard-based wireless networking analysis, design, and development.