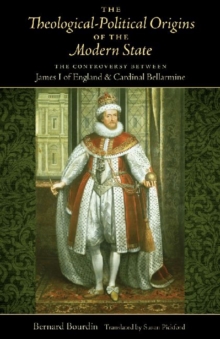 The Theological-Political Origins of the Modern State : The Controversy between James I of England and Cardinal Bellarmine Hardback

Yet in European history, the sovereignty of the people arose from the divine delegation of royal sovereignty to the temporal and spiritual orders -- a theory that the Holy See could not countenance.

The controversy that erupted between James I of England and Cardinal Bellarmine following the Gunpowder Plot of 1605 is a striking illustration of this political and ecclesiological dispute over who ultimately holds absolute sovereignty by divine right -- the king or the pope?

In this work, Bernard Bourdin clearly sets forth the political thought and theology of James I as an early intellectual foundation for the modern state.

He offers a comprehensive examination of James's intense dispute with Bellarmine, a controversy that sent shock waves throughout Europe and had a lasting impact on the rise of the modern state.