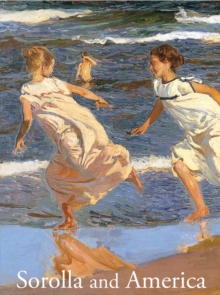 Joaquin Sorolla y Bastida (1863-1923) first achieved major international success with his painting !Otra Margarita! (Another Marguerite!) (1892), for which he received first prize at the World's Columbian Exposition of 1893 in Chicago.

This painting was also the first work by the Spanish artist to enter an American institution when it was donated to the Museum of Fine Arts (today the Mildred Lane Kemper Art Museum) at Washington University in St.

Furthermore, the artist was invited to the White House to paint the portrait of President William Howard Taft.

The landmark exhibition of 1909 was followed two years later by another major show of more than 150 of his paintings held at the Art Institute of Chicago and the St.

Louis Art Museum. Sorolla and America explores the artist's relationship with early twentieth century America through the lens of those who commissioned him, those who collected his works, and those artists, such as John Singer Sargent and William Merritt Chase, with whom Sorolla closely associated.