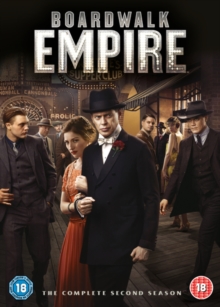 All 12 episodes from the second season of the Golden Globe-winning HBO period drama set during the 1920s Prohibition era.

In this series, Nucky's position of power is threatened by his former employee, Jimmy (Michael Pitt), his brother, Eli (Shea Whigham), and his predecessor, Commodore Louis Kaestner (Dabney Coleman), who formulate a plot to bring him down.

The episodes comprise: '21', 'Ourselves Alone', 'A Dangerous Mind', 'What Does the Bee Do?', 'Gimcrack and Bunkum', 'The Age of Reason', 'Peg of Old', 'Two Boats and a Lifeguard', 'Battle of the Century', 'Georgia Peaches', 'Under God's Power She Flourishes' and 'To the Lost'.