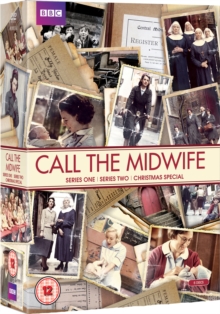 Call the Midwife: The Collection DVD

The first two series and the 2012 Christmas special of the BBC drama adapted from Jennifer Worth's memoirs about a group of midwives working in East London in the 1950s.

Jenny Lee (Jessica Raine) gets her first job at Nonnatus House which she soon realises is a nursing convent and not a hospital, as she had assumed.

In series two, it's 1958, and while Jenny has her hands full dealing with an abused patient, Trixie and Sister Evangelina (Pam Ferris) are forced to board a Swedish cargo ship to tend to the captain's pregnant daughter.

In the Christmas special, the discovery of an abandoned baby on the convent's doorstep proves to be a catalyst as the community come together to try to trace the child's mother.