Justice blind to - or blinded by - race Drawing on previously untapped sources, these nine community studies represent some of the best new work on how racial justice can be shaped by the particulars of time and place.

Although each essay is anchored in the local, several larger themes emerge across the volume - such as the importance of personality and place, the movement of former slaves from the capriciousness of ""plantation justice"" to the (theoretically) more evenhanded processes of the courts, and the increased presence of government in daily American life.

Local Matters cites a wide range of examples to support these themes.

One essay considers the case of a quasi-free slave in Natchez, Mississippi - himself a slaveowner - who was ""reined in"" by his master through the courts, while another shows how federal aims were subverted during trials held in the after-math of the 1876 race riots in Ellenton, South Carolina.

Other topics covered range from blacks and the ballot in Washington Country, Texas, to slaves, crime, and the common law in New Orleans. 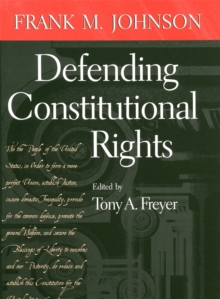