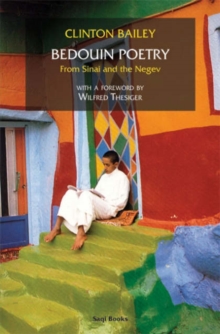 Bedouin Poetry : From Sinai and the Negev Paperback / softback

The desert dwelling bedouin have always been a subject of intense fascination.

Their culture and ethics are still largely a mystery.

Like other non-literate peoples, the bedouin have a strong tradition of oral poetry, which plays an indispensable role in their daily life.

Clinton Bailey has spent more than twenty years among the bedouin of Sinai and the Negev, studying their culture and recording their poems as recited around the campfires.

This book presents 113 poems which reflect bedouin attitudes to a variety of personal, social and political experiences.

The poems are also presented in Arabic script and in phonemic transliteration.

They are arranged according to their purpose: poems of expression, communication, instruction and entertainment, and poems reflecting the Bedouin response to Turkish, British, Egyptian, and Israeli rulers from 1882 to 1982.

The author also devotes chapters to discussing the role that poetry plays in bedouin life, and describing how 'desert' poetry has persisted from pre-biblical times to the present.