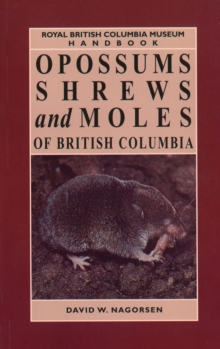 Part of the RBCM Handbooks series

British Columbia has the greatest diversity of insectivores (shrewsand moles) of any Canadian province: twelve species.

In some habitats,insectivores are the dominant mammals.

But humans rarely see any of these mammals,except for the occasional shrew brought in by the family cats ormolehills observed in gardens or on golf courses.

Even naturalists arelargely unfamiliar with them. In Opossums, Shrews, and Moles of British Columbia, DavidW.

Nagorsen presents a comprehensive summary of the most up-to-dateinformation on these intriguing mammals.

He provides generalinformation on their biology, including ecology, diets, anatomy,relations with humans, and conservation.

Illustrated keys aid inidentification. In detailed species accounts, the author givesdescriptions of each species, along with their identifyingcharacteristics, natural history and taxonomy.

Each account isaccompanied by illustrations and a provincial range map. 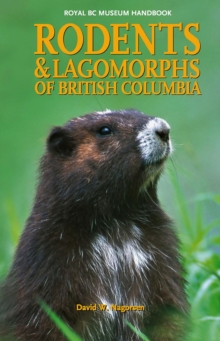 Rodents and Lagomorphs of British...