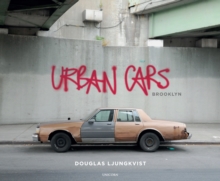 Since 2007 Douglas Ljungkvist has been photographing vintage cars, mostly in Brooklyn's urban and industrial landscapes.

The work has matured into a cohesive typology ready for publication.

The project is a study of form, design, and beauty documenting cars mostly between the 1960's and late 1970's.

The cars are photographed similar to formal portraits, in profile and isolated from people and other cars.

The visual relationship between the cars and their environment is more important than the brand, model, production year, or engine size.

The process is similar to a nature photographer looking for exotic animals to photograph in the wild.

It's a bit like looking for a needle in a haystack. Whether on his scooter or on foot Ljungkvist has perfected a one second glance down a block looking for unusual shapes or colors to identify something to add to the collection.

Ljungkvist even followed a few of them on his scooter until they parked and the owner walked away.

American cars of this era are still popular for their (masculine) aesthetics and raw power.

They were built with individual expression in mind, to be seen and heard, at a time when everything was big and bold.

As mechanical cars they are fairly easy to maintain and tinker with for hobbyists.

The European cars in the collection reflect longevity and craftsmanship, attributes that are rare in today's modern and generically designed cars.

The work is also a celebration of 1970's vernacular color photography and the freedom, expression, and adventure that the automobile represented in American popular culture at a time when people didn't worry about the price of gasoline.