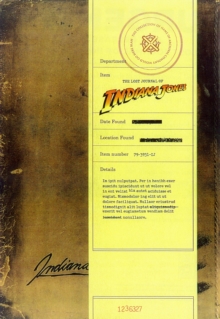 From the scorching sands of Cairo to the Canyon of the Crescent Moon, this personal journal of Dr Henry 'Indiana' Jones, Jr chronicles every thrilling adventure, from the original Raiders of the Lost Arkto the eagerly anticipated fourth feature film.

Filled with sketches, notes and jottings in the great man's own hand, and accompanied by rare archive photos and much material never published before, the journal records the artefacts and discoveries, the folklore and the characters -- not to mention the narrow escapes and heroic escapades -- encountered on each of his globetrotting travels.

For Indiana Jones fans old and new who wish to recapture the excitement of these legendary films in book form, The Lost Journal of Indiana Jonesprovides a uniquely vivid inside view of the swashbuckling world of cinema's most popular adventurer.