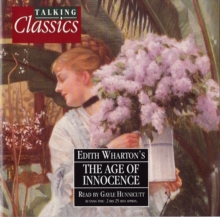 The Age of Innocence eAudiobook MP3

Wharton's novel The Age of Innocence is set against an exclusive society background in which she reveals how Newland Archer is often the victim of, rather than the key player in, the events.

The plot is constructed on a pattern of ironic misunderstandings: for example, Newland is unaware that Ellen's decision not to sue for divorce was for his and May's sake rather than to conceal her past.

Furthermore, Newland remains largely blind to the manipulations of a wife he persists in seeing as innocent and naive. 1. A NEW ARRIVAL. Among New York's elite families attending the opera is Newland Archer, an eligible bachelor who is excited at the prospect of his forthcoming engagement to Mary Welland.

There is some surprise at presence among May's prestigious family of her cousin Ellen Olenska, who has returned from Europe after an unhappy marriage.

Newland supports May's family by showing courteous attention to Ellen whom he has not seen since childhood.

The engagement of May and Newland is announced at a society ball after the opera. 2. AN IMPORTANT DECISION. Through his law firm, Newland is consulted about Ellen's intention to divorce her husband.

A letter which he believes compromises her past behaviour makes him persuade her not to press her case.

Ellen decides, in the interest of preserving her family's reputation, not to pursue her plan.

Newland impulsively sends her an anonymous bouquet of roses.

When she sees him again, Ellen indicates that she knows he sent them, and hints at an affection between them. 3. GROWING ATTRACTIONS. Ellen retreats to the country home of the Van der Luydens.

Visiting her there to ask her why she left New York, Newland finds that their feelings for each other have grown stronger.

When he discovers that she is apparently trying to avoid the attentions of the charismatic financier Julius Beaufort who is pursuing her, he is unsure of her real motives.

Newland soon receives a note from Ellen telling him she wishes to explain but he decides to avoid further temptation by departing immediately to join his fiancee and her family in Florida.

There, he tries to persuade May to advance the wedding date.

Suspecting there may be someone else he cares for, May gives him the opportunity to reconsider his proposal.

Newland assures her this is not necessary. 5. MEETING. On his return to New York, Newland arranges to see Ellen again.

He confesses that she is the woman he really wishes to marry and Ellen reveals that the real reason she gave up her plans for divorce was for his and May's sake.

When Newland talks of breaking off his engagement, Ellen dissuades him, pointing out that since he taught her to be sensitive to the feelings of others, she cannot love him unless gives him up.

May informs Ellen that her parents have agreed to an early marriage. 6. SEPARATION. Newland and May, married since Easter, are spending the summer with relatives at Newport.

Although secretly dissatisfied with his existence, Newland has tried to put his memories of Ellen behind him.

But when he hears from Ellen's Aunt Medora that Ellen is in Boston, he is determined to visit her.

Ellen cannot hide her pleasure when Newland surprises her with his visit.

She announces that her husband has made her a substantial financial offer to return to him.

Ellen reveals that it is her love and respect for Newland and his reputation which are preventing her from returning to Europe.

In a painful exchange, each realizes that there is no solution to their unhappy, separate existences.

Ellen goes to live in Washington, not Europe. In New York, the family rallies round Mrs Manson Mingott who has had a stroke.

They reluctantly send for Ellen, whom she wants with her. 7. A PAINFUL DILEMMA. Newland meets Ellen on her arrival in New York. In an emotional conversation, they can still see no way of ending their dilemma.

During several days of enforced separation, Newland formulates a plan to leave May and go abroad with Ellen.

Deciding he must talk to Ellen, he arranges to meet her at the Art Museum.

Ellen declares she must now return to her husband. Despairingly, they arrange one final meeting. 8. FAMILY LOYALTIES. May senses that a crisis with Newland is approaching.

At the opera, two years since he first met Ellen there, Newland determines to tell May about his plans to go abroad with Ellen.

Before he can do so, May interrupts him with the news that Ellen intends to return to Europe.

Newland decides he will still follow her. At a farewell dinner for Ellen, Newland becomes aware that May and her family have suspected an affair all along, and have combined to arrange Ellen's separation from him.

When Newland attempts to tell May his plan, she interrupts him to reveal shyly that she is pregnant and that Ellen also knows this. 9. EPILOGUE. Twenty-six years later, the widowed Newland accompanies his son Dallas to Pans where Ellen, also widowed, lives alone.

Newland is moved to learn that May had understood the sacrifice he had made to preserve his marriage.

His son arranges for them to visit Ellen. There is nothing now to keep them apart, but Newland, cannot overcome his old-fashioned values and decides, at the last minute, not to see Ellen again