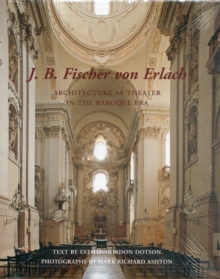 J. B. Fischer Von Erlach : Architecture as Theater in the Baroque Era Hardback

Though little known in the English-speaking world, Johann Bernhard Fischer von Erlach (1656-1723) was one of the most important and influential European baroque architects.

The buildings that he designed for the emperor of Austria and his courtiers reveal an element of theatricality-an element that author Esther Gordon Dotson probes in this attractive volume. In his architectural designs, Fischer incorporated devices from ceremonial pageantry and scene design, controlled lighting effects, and a sense of dramatic progression in approaching and moving through a building.

Dotson identifies these various elements in her close reading of Fischer's structures, and splendid new photographs, taken by Mark Richard Ashton, bring them to life on the printed page.

The author also delves into Fischer's past and his writings to explain the impact his awareness of architectural history, his early employment by designers of street-festival pageants and his relationships with others involved in such staged productions had upon his architectural designs.