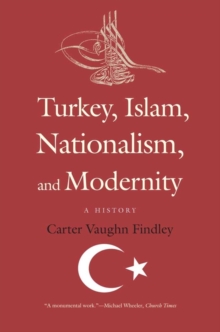 The radical current began with the formation of reformist governmental elites and expanded with the advent of “print capitalism,” symbolized by the privately owned, Ottoman-language newspapers. The radicals engineered the 1908 Young Turk revolution, ruled empire and republic until 1950, made secularism a lasting “belief system,” and still retain powerful positions.

The conservative current gained impetus from three history-making Islamic renewal movements, those of Mevlana Halid, Said Nursi, and Fethullah Gülen. Powerful under the empire, Islamic conservatives did not regain control of government until the 1980s. By then they, too, had their own influential media.

Findley's reassessment of political, economic, social, and cultural history reveals the dialectical interaction between radical and conservative currents of change, which alternately clashed and converged to shape late Ottoman and republican Turkish history.