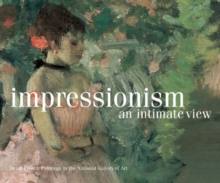 The art of the Impressionists has enduring appeal. Exhibitions on impressionism and impressionist artists continue to draw large crowds.

Yet very little has been published that focuses on the intimate nature of much of impressionist art.Presenting over fifty works by major artists such as Bonnard, Corot, Cezanne, Degas, Van Gogh, Matisse, Monet, Renoir and Toulouse-Lautrec, and using the Ailsa Mellon Bruce Collection of small French paintings in the National Gallery of Art as its starting point, this beautifully illustrated new volume explores two important aspects of impressionism.

First, it illustrates how artists like Monet, Pissarro, Degas, Cezanne, Sisley and Renoir sought to capture fleeting, everyday moments and objects that made up their own lives and those of the people around them: their immediate family, friends, servants and strangers.

The scale and subject matter was in stark contrast to the paintings of the official Salon.

In place of large-scale academic or neoclassical subjects the impressionists turned to self-portraits, flowers in a crystal vase, a view of dancers backstage, a sister at a window, or an interior just after dinner-works that were once highly personal and introverted, wistful and dreamlike, transient and intimate in scale.

Moreover, the author shows how the painting of earlier realist and landscape artists such as Corot, Rousseau, Boudin and Manet was absorbed into the small-scale impressionist works of an emerging generation of aspiring artists that included Monet, Renoir, Morisot and Pissarro.

This highlights the second important feature of impressionism - its central role within the development of later nineteenth-century French and European modern art.

In an introductory essay and in thematic groupings of works the author shows how, when the first impressionist exhibition opened in April 1874, critics were shocked at the small scale, -unfinished- nature of the paintings with their unmixed pigments and broken brush work, more akin to oil sketches.

By the time of the last impressionist exhibition in 1886 the concept of what constituted a finished work had changed.

Smaller, sketchier painting was increasingly admired for its freshness and immediacy of expression, and impressionism had given way to a radical reinterpretation by a new generation of artists.

These included post-impressionists such as Seurat, Gauguin, Van Gogh and Cezanne;Vuillard and other members of the Nabis inspired by Gaugin; and, at the outset of the twentieth century Matisse, Derain and Duffy, known as the -fauves- ('wild beasts'), creators of highly coloured and emphatical brushworked paintings.