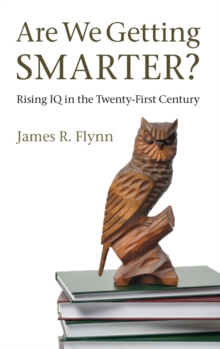 Are We Getting Smarter? : Rising IQ in the Twenty-First Century Hardback

The 'Flynn effect' is a surprising finding, identified by James R.

Flynn, that IQ test scores have significantly increased from one generation to the next over the past century.

Flynn now brings us an exciting new book which aims to make sense of this rise in IQ scores and considers what this tells us about our intelligence, our minds and society.

Are We Getting Smarter? features fascinating new material on a variety of topics including the effects of intelligence in the developing world; the impact of rising IQ scores on the death penalty, cognitive ability in old age and the language abilities of youth culture; as well as controversial topics of race and gender.

He ends with the message that assessing IQ goes astray if society is ignored.

As IQ scores continue to rise into the twenty-first century, particularly in the developing world, the 'Flynn effect' marches on.