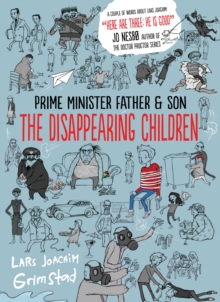 After years of listening to passengers complaining in the back of his cab, Teddy Popps knows exactly what the electorate want: NO MORE POT HOLES IN THE ROAD AND MORE CRISPS IN CRISP PACKETS! And he was right: his MORE Party are voted in power against all the odds! But all is not well . Finn's newly-acquired brother (a gift from a dictator in a faraway land) is acting suspiciously, and one-by-one children in Finn's class start to disappear...Hilariously brilliant packed with intrigue and adventure!

REVIEWS: "A taxi driver who becomes Prime Minister, a robot with a speech impediment, children who are abducted by giant flies...Anything can happen..." -- DAGBLADET MAGAZINE. "The Disappearing Children is a real adventure book.

It is insanely funny, thrilling without being frightening. The book is superbly well written while still being easy to read" -- BOKMERKER LITERARY REVIEW. "A couple of words about Lars Joachim: here are three - he is good!!" -- JO NESBO.