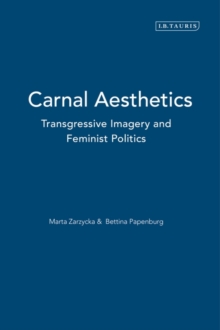 Art today is an increasingly multifaceted phenomenon, encompassing transgressive works that intervene in war and ecological disasters, in inequalities and revolutionary changes in technology.

Carnal Aesthetics is a fascinating, new examination of this aspect of contemporary visual culture.

Employing recent theories of transgressive body imagery, trauma, affect and sensation, it provides a fresh look at the meeting point between the politics of representation and the politics of perception through the prismatic lens of feminist theory.

They explore here a number of transgressive movements that significantly reconfigure the relationship between the body and the image.

Unlike other books on the complex relationship between politics and aesthetics, Carnal Aesthetics seeks to provide a novel approach to art and culture by challenging the primacy of vision and by injecting an intersectional perspective into the fields of visual studies, film and media studies, as well as trauma studies. It is a significant contribution across these dynamic fields of exploration for scholars who deal with the socio-political nature of contemporary visual culture in their work.