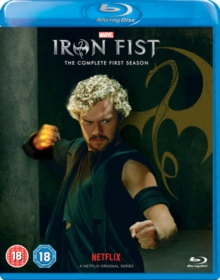 All 13 episodes from the first season of the action adventure series starring Finn Jones as the Marvel Comics character Iron Fist.

After returning to New York 15 years after disappearing and being presumed dead, Danny Rand (Jones) takes on the powerful Harold Meachum (David Wenham) in a bid to take back control of his family business.

However, Rand soon finds trouble as he attempts to preserve his family's legacy while also undertaking his duties as Iron Fist.