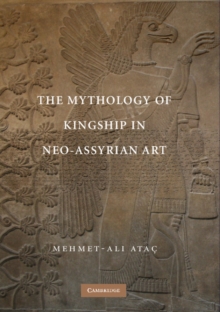 The Mythology of Kingship in Neo-Assyrian Art Paperback / softback

The relief slabs that decorated the palaces of the Neo-Assyrian Empire, which emphasized military conquest and royal prowess, have traditionally been understood as statements of imperial propaganda that glorified the Assyrian king.

In this book, Mehmet-Ali Atac argues that the reliefs hold a deeper meaning that was addressed primarily to an internal audience composed of court scholars and master craftsmen.

Atac focuses on representations of animals, depictions of the king as priest and warrior, and figures of mythological beings that evoke an archaic cosmos.

He demonstrates that these images mask a complex philosophical rhetoric developed by court scholars in collaboration with master craftsmen who were responsible for their design and execution.

Atac argues that the layers of meaning embedded in the Neo-Assyrian palace reliefs go deeper than politics, imperial propaganda, and straightforward historical record.