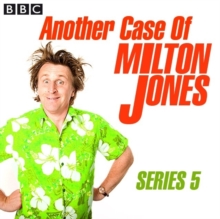 The man they call 'Britain's Funniest Milton' stars in his smash-hit Sony Award-winning show "Another Case Of Milton Jones" co-starring Tom Goodman-Hill ('Ideal'), Lucy Montgomery ('Down The Line') & Dan Tetsell ('Mongrels') In each episode, Milton is a complete and utter expert at something - Astronomer, Diplomat, Undercover Journalist, Celebrity Gardener (!), Royal Speech Therapist or Lorry Driver - and in each episode, with absolutely no ability or competence, he plunges into a furiously funny and fast-paced adventure with utterly hilarious results. In this episode Milton Jones is an International Diplomat who is on the run after leaking all the UNâ€™s emails - except for the Swiss ones, which were too dull. And he meets a shadowy hacker. And the shadowy hackerâ€™s mum. So if you've ever wanted to know what The Bourne Identity meets Wikileaks sounds like then plug in that memory stick and hack into â€œAnother Case Of Milton Jonesâ€